Izumi Yukiharu is a second-year high schooler. After suddenly losing his parents one day, the only thing he’s inherited is a 50,000,000 yen debt?! Without a place to live, Yukiharu stumbles into a certain residential home . To repay the debt, he’s designated as “their Catships’ catservant“...?! The curtain raises on a somewhat peaceful, slapstick pampered cat comedy! Read more

The Cowherd and the Fairy Webtoon


Karaboshi Haruki has no presence as far as can be recognized, and so he became an adventurer with only the desire to “stand out.“ One day, a dungeon appeared under his home in Hokkaido. Coincidentally, he picked up a “Skill Board“ with which he can spend skill points to increase his growth rate. Is it possible to become a popular person by obsessively diving into your home dungeon everyday? Read more


Takemichi is a 26-year-old unemployed virgin who learns that the girl he dated in middle school—the only girl he ever dated—has died. Then, after an accident he finds himself in a time leap back to his middle school years. He vows to change the future and save the girl, and to do that he aims to rise to the top of the Kantou region's most brutal delinquent gang. Read more


An accident gave Ye Han an amazing perspective ability. Since then, his life has become rich and colorful, pioneering the strongest business empire, dominating the world of gambling, rejuvenating with one-handed medical skills, and becoming a master of medical ethics. Sitting on billions of fortunes, Loli, Yujie, Jinghua, and the goddess rushed towards him. As a man, but also a limited edition man, Ye Han was under great pressure and had to explore with several grave robbers. However, , A shocking secret that has been traced from ancient times to the present has gradually Read more


Question: What would you do, if a girl you're interested would confess to you? On top of it, it wouldn't be just the on girl. A cool upperclassman adored by the whole school. And your cheerful, energetic childhood friend. I bet you would be over the moon. Thing is, what if there was an unexpected problem about the contents of that confession? Read more


Magic Emperor summary is updating. Come visit MangaNelo.com sometime to read the latest chapter of Magic Emperor. If you have any question about this manga, Please don't hesitate to contact us or translate team. Hope you enjoy it. Read more

The Duke of Death and His Black Maid


In a large mansion lives a boy, an aristocrat who was cursed by the witch to "let everything he touches die". With him is his maid Alice, who besides serving him likes to tease him. The boy who is interested in her doesn't mind the teasing, but not being able to touch her is painful!If they are unable to hold hands, will their love ever bloom? Read more


From MangaHelpers: Luca's friend Will, who is from a lower-class segment of society, has gone missing. Luca's only clue to find his friend is his fondness for a certain club in the entertainment district, where a woman named Yue performs. Will had always said they should go there together sometime. When Luca goes down alone to try to speak to Yue, though, he ends up being beaten badly. Luckily, Yue herself finds him, and takes him to her friend Takaomi to be patched up. It soon becomes clear that Will has fallen victim to a chimera sickness that is becoming common in... Read more


Alternative Final is a doujinshi made by Brazilian fans to complement and redirect the story of the last official volume of Bleach. Read more


In senior high, they missed each other because of a misunderstanding and after graduating, they return to their alma mater as teachers. The male lead can't recognize the female lead because seven years have passed!? An insensitive cold female PE teacher, and a two-faced smiley male math teacher, meeting once again. Things remaining the same but people changing, can the feelings that once died come back again? Meanwhile, the secret from senior high is slowly revealing itself... Read more

What Kind of Empress Is This Webtoon


A customer service worker Jin Ye-Rom has encountered a very troublesome customer, causing her number one employee status to disappear. Wanting her status back, she decides to find that customer and personally apologize to him, but, suddenly, she finds herself in a strange place. The next thing she knows, she's become the Empress, and that troublesome customer turns out to be none other than the Emperor himself! Read more 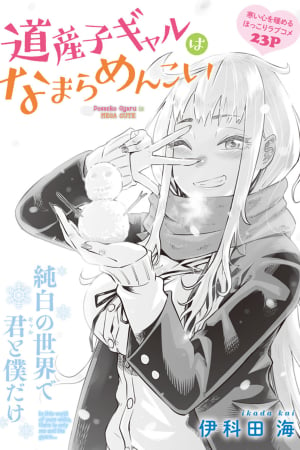 
Natsukawa Tsubasa has just moved from Tokyo to Hokkaido, in the middle of winter. Not quite appreciating how far towns are in the country, he gets off the taxi at the next town over from his destination, so he can see the sights around his home. But he is shocked when he learns the "next town" is 3 hours walk away. But he also meets a cute Dosanko (born and raised in Hokkaido) gyaru named Fuyuki Minami who is braving 8 degrees celcius below 0 weather in the standard gyaru outfit of short skirts and bare legs! Read more

Ryuu to Yuusha to Haitatsunin Others


“Hello fellow citizens. I am Yoshida the half-elf, working for the post office of the Imperial City of Idazig. My job is to deliver letters and documents to wherever you need them to be, whether it be a castle in the sky or the bottom of an abyss.“ This is a comedy written by the biggest Medieval Ages geek, hitting the fantasy genre from an entirely new angle! Read more


Wilcome, wilcome! This is a 4-koma about a cafe run by two avian sisters. Originally a oneshot, before winning a newbie contest and being awarded a serialization. Read more

This Gyaru Will Date the Otaku in 100 Days


There are gamblers out there who even bet their lives as ante. But to secure the integrity of these life-threatening gambles, a violent and powerful organization by the name of “Kagerou” referees these games as a neutral party. Follow Bak Madarame a.k.a. Usogui (The Lie Eater) as he gambles against maniacal opponents at games – such as Escape the Abandoned Building, Old Maid, and Hangman – to ultimately “out-gamble” and control the neutral organization of Kagerou itself. Read more


In senior high, they missed each other because of a misunderstanding. After graduating, they return to their alma mater as teachers, but — seven years have passed, and Yang Mu Li (two-faced match teacher) doesn't seem to recognize Xuan An (cold PE teacher)?!<br><br>Though many things have remained the same, the people themselves have changed. Can the feelings that once died come back once more? Meanwhile, the secrets from their senior year of high is slowly revealing itself... Read more


A 30 episodes short comic by Shimazaki Mujirushi Mizuguchi Mayu, a girl who hates men, fell in love at first sight with a... "man-in-drag"!? Does she likes "girls"? Or does she likes "boys"? Find out in this heart throbbing pure love comedy! (from twi4) Read more


Maybelle had lived a life of abuse under her parents. Upon discovery that these 'parents' aren't her true biological parents and that somewhere, her father exists, Maybelle sets off in search of him. Read more

Legend of the Tyrant Empress